Why Focus on Healthcare?

Healthcare facilities spend over $6.5 billion on energy costs per year. 1In 2008, healthcare expenditures were $2.3 trillion representing approximately 16% of the Gross Domestic Product. 2When compared to other sectors – education, office, public assembly – healthcare facilities are one of the highest energy consumers.

Energy optimization focuses on measurement and verification to ensure mechanical system performance is matched to demand. It involves tuning the existing system for performance, and energy savings is a natural byproduct of optimal performance. Unlike energy audits which focus on capital equipment upgrades, optimization eliminates waste through low-cost adjustments or minor mechanical fixes to existing equipment to make it operate as intended and as needed in the building’s current state of use. These modifications eliminate energy waste and extend the life of the equipment.

Optimization involves a systematic process of:

The cornerstone of the program is the collection and analysis of real time performance data upon which decisions are made and opportunities identified. This performance data often illustrates that what you think is happening in the building is, in fact, incorrect. No matter how advanced the building management system is, these direct energy measurements will often uncover inefficiencies (e.g., overridden control sequences, short-cycling of compressors, unintended equipment operation).

Energy optimization is focused on maximizing the return on investment (ROI), which in order to be viable for healthcare facilities is typically 12 months or less. EH&E has typically seen savings of 10% or more in hospitals, varying in size from 150,000 sq. ft. to 600,000 sq. ft.

Hospitals have unique traits that must be taken into consideration when undertaking an energy optimization project.

In November 2011, EH&E initiated an energy optimization project for an acute care hospital, located in the northeast, with laboratory space and an adjacent medical office building. A goal of 8% total energy savings with a one year payback period was established for the project. Eleven months after project initiation, savings are at the 10% level. This case study details the method for assessing savings opportunities in the hospital and the key findings of the assessment.

An initial review of the hospital’s overall energy usage was conducted to identify usage patterns. An electric utility bill summary review revealed high unoccupied usage of 60% representing nearly all of the unoccupied hours. Although a hospital typically will have a high unoccupied electric consumption profile due to 24/7 patient occupancy, the actual consumption indicates that there is very little “turn-down” anywhere in the hospital despite non-patient areas that are unoccupied for specific periods both during the week and weekends. Energy consumption during off peak hours presented an opportunity for savings.

The hospital facilities staff and EH&E conducted a walk-through of the hospital to identify patient rooms, direct patient areas (radiology, ER, nurses’ stations), indirect patient areas (patient equipment storage), office areas, cafeterias, and common areas. The space survey determines exactly what spaces are being served by each air handler to help inform decisions regarding what equipment should be on and off at different times of the day. Staff knowledge of hospital use by area is invaluable.

Real-time data was collected from air handling units, chilled water system, steam/hot water system, compressors, patient rooms, and non-patient rooms with the purpose of determining how systems were actually operating. When examining an air handling unit, we review the chilled water and hot water serving it, and simultaneously the condition of the spaces served by the air handler. Pairing systems provides more meaningful data.

Three primary opportunities for energy savings were identified that would meet our 8% savings goal and fast payback period:

Virtually all air handlers were scheduled to run 24/7; we’ve found this to be a common issue in hospitals. Twelve of twenty four air handlers and associated exhaust/return fans were taken offline for between 4-8 hours during the night (slightly more on weekends). The leaking steam valves were replaced, eliminating both wasted steam use and the additional associated summer cooling load.

The lack of modulation in the secondary hot water pumps was investigated and found to be the result of changes over time that would require a capital project to correct. This is a good example of a valid measure identified that is recommended to improve performance and reliability, but not implemented under the performance optimization project due to cost and payback.

Conservative annual cost savings estimates from the above of $160,000 (approximately 8%) were calculated for the project to-date. Cost savings after 11 months have met the annual goal.

Seasonal opportunities for additional savings are anticipated and include:

Actual savings for the first 11 months of the project are shown below.  The savings are calculated from a model comparing whole building utility data for the “performance year” (post implementation) with the base year data (pre-savings year) normalized weather, billing days and non-base year building load.  Savings as predicted will meet or exceed the initial estimates. 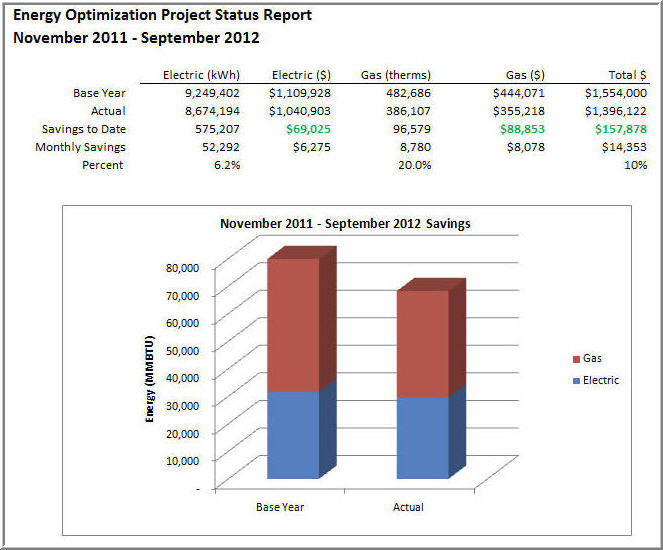